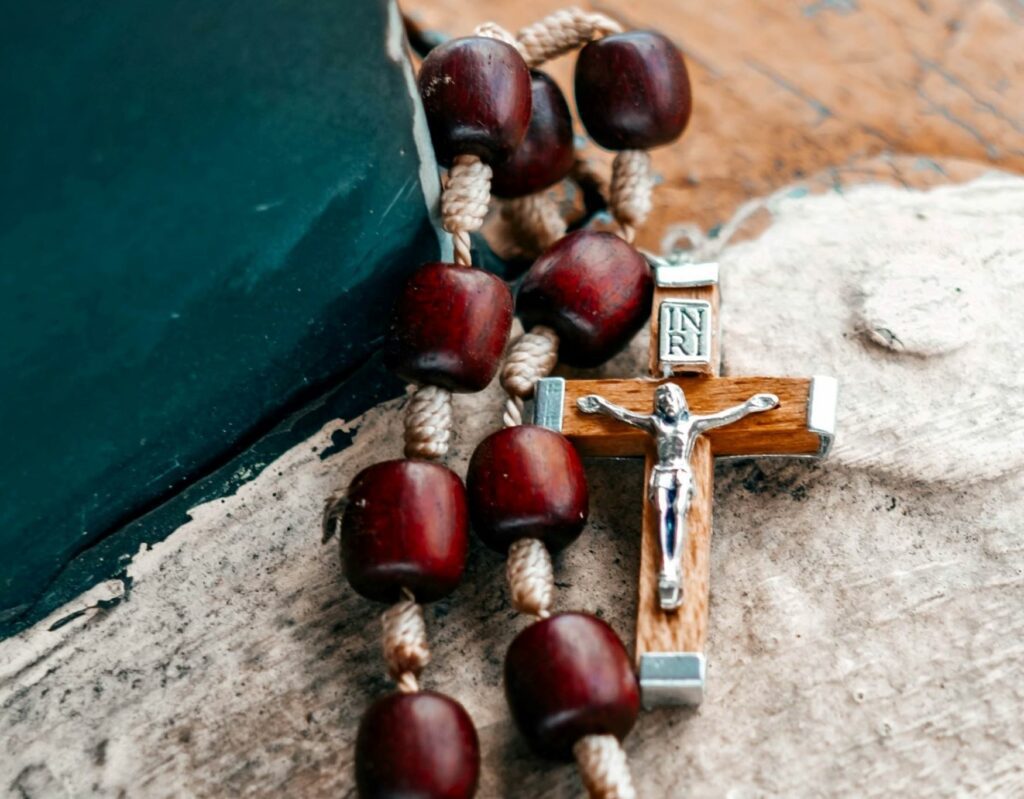 “Ask my family to say the rosary for me, Lin, please,” Grandpa Jim said.

My father-in-law’s voice, warmed by a slight Kentucky drawl, a remnant of his birthplace, was fresh in my ear. But his lips had not moved. He lay in a coma, about to die.

But I’m only an in-law, I thought, it’s not my place to suggest that. Grandpa Jim’s family – children, spouses, grandchildren — clustered around the hospital bed. The stench of sick clung to the air. No amount of disinfectant scrubbed it.

“Please, Lin,” he said, again into my Mind. “It’s important. Ask them.” The fluorescent light above the bed was dim. Except for the beep of the heart monitor, the room was quiet.  A catheter dripped fluid into his age-spotted hand. No movement was discernable underneath his blue-specked gown; the ties at the neck were loose.

It just wouldn’t be right,” I thought. My rosary, beads of ochre wood on a silver chain, was in the pocket of my sweater.  Hours before, I’d closed the door of the car in the hospital parking lot, but a thought had said, take your rosary, so I’d reached back in to grab it. I kept it in the console, a talisman for safety on the road. It didn’t occur to me to ignore the thought.

“I want to hear the rosary one last time,” Grandpa Jim said in my ear. In the family’s home, Saturday evening rosary had been a Catholic ritual. His children would much rather have played outside until the streetlights blinked on. Over the years, I’d heard them rib him with affection about it. He chuckled, but without apology.

Grandpa Jim’s heart rate zigged and zagged. He moaned. I drew up tight to my husband, another Jim, the oldest of six, who stood next to the bed. I hoped the comfort of his body would stop the shake of mine. He held his father’s hand, limp and pale, in his own, strong, and bronzed by sun.

I cupped my hand to his ear and said, “Jim, I think your Dad would like you all to pray the rosary for him.” Grandpa Jim’s scratched eyeglasses and a frosty Styrofoam cup of ice chips rested on the bedside table, next to a spoon. My Jim raised his long fingers to shield his mouth and said, “I don’t have my beads.”  His eyes were wet.

“I have mine,” I said, and extracted them from my pocket. I reached around his shoulder to spill them into his outstretched hand.

In his early days as a milkman, Grandpa Jim pulled a route in Detroit behind horses on a wagon, an icebox, painted with the creamery name: Borden’s.

In time, the milk wagon was replaced by a gas-powered van, but his routine didn’t change. Rise at 3 AM; grab coffee and two pieces of buttered white toast, be out the door in a half hour.

Sometimes when we visited, I’d get up early and join him at the mahogany dining room table, moments made precious by the intimacy of the wee hour. I felt welcomed. He never missed a delivery. He would not inconvenience anyone.

Grandpa Jim moaned again and one of his sons coughed out a sob. A nurse crept into the room on soft soles and turned off the heart monitor. The end was near.

“Would it be ok if we prayed the rosary,” my husband said to his family. His voice was tender, hoarse.  “Please.” “Yes.” “Of course!” came the chorus.

With the practice of a little boy who slipped into a well-oiled family ritual, my Jim knelt on the floor and genuflected next to his father. I moved aside to make room for his jean-clad leg and signature black motorcycle boot. I put my hand on his shoulder.

The big wooden crucifix dangled from Jim’s hands as he rubbed the beads and threaded them through his fingers at the end of the prayers, recited in groups of ten.

On the first “Hail Mary” of the second decade, Grandpa Jim expunged a long sigh. His last breath expressed from his lungs. He forgot to inhale.

As if drawn by a current of energy, I felt my body rise up. Grandpa Jim’s spirit swept through me as it left the room. The hair on my arms stood in farewell. Our prayer grew more intense, a crescendo.

I was shaken to the core. I had never seen anyone die, much less someone I had loved so much.

Much to my surprise, in that hospital room cathedral, I experienced death as mystical and as sacred as birth.  Eyes closed, head bowed, I thanked Grandpa Jim for his love. I wished him Godspeed to his destination.

As I left the room, I looked over my shoulder at him. His old body, slack-jawed, mouth open, lay pale, shrunk into the swath of white sheets. Framed by thin grey hair, his head lolled into the pillow. He was lifeless.

The essence of the man I loved was gone, the body left behind a fragile shell.  The stark contrast between what had been and what now was, startled me. I understood that our bodies are a temporal home, a place enervated by a holy essence.  In the sudden absence of that essence, I glimpsed the nature of God, an energy without form. Intelligent. Wise. Alive. Breathing.

There was nothing to do but wonder at the mystery of it all, get into a car and drive forward into the next moment, the next, and the next.

My husband Jim stayed overnight at his parent’s home to comfort his Mom.  We decided it was best that I take our teen-aged daughter to spend the night at my parent’s home.  After I told my parents that Grandpa Jim had died, we made subdued small talk; there wasn’t much to say in the shadow of such a loss.  I went to bed and was soon asleep.

2:00 AM. The digital clock beside my bed shone into the darkness and announced the time.

I padded to the kitchen, feet bare, to get a glass of milk and home-made chocolate chip cookies, my way illuminated by the hood light on the stove.  The night air was sultry, fragrant with fresh mowed grass and dew. I slipped into the screened Florida room at the back of the house and curled my feet under my legs on the couch.

My thoughts drifted back to the hospital. I wondered where Grandpa Jim’s body was.  It was incongruent to think of it in a morgue drawer, a cold space too ugly and clinical for such a warm, devoted, and tender life. I shivered at the unreality.

My muses were interrupted by a swirl of small, star-shaped lights that danced on the rolling lawn. They hovered, dipped, and spiraled, a gossamer, evanescent vortex.

Must be fireflies, I thought.  I stood and walked closer to the large casement windows. I squinted to bring the whirlwind of twinkled lights into focus. No, they’re much bigger than fireflies and they’re star shaped, I thought, puzzled.

Grandpa Jim spoke one final time into the quiet of my mind.  His voice was unmistakable and, as it often had been, on the verge of a gentle laugh. “Lin, thank you,” he said, “for asking my family to say the rosary for me. It was a little bit easier to leave. I love you all so much. Good-bye now.”

Riveted. Hushed. Breathless.  The lights shimmered and vanished. As they withdrew, I had the sense that an energy had departed, the same sense that I’d had earlier in the hospital room, though the current was softer and subtler. Deep love and peace bloomed in my body as the echo of Grandpa Jim’s good-bye faded.

There was not then, nor has there ever been, a shred of doubt that Grandpa Jim spoke to me from his deathbed and that he visited later, made visible in the tremble of the fragile stars in the waltz of that spiral. Without question, Grandpa Jim’s life energy had taken form in my thoughts and in that swirl of light.

I slipped my rosary out of the pocket of my robe, fingered the beads, and wept with grief and gratitude.

Photo by John Benitez on Unsplash 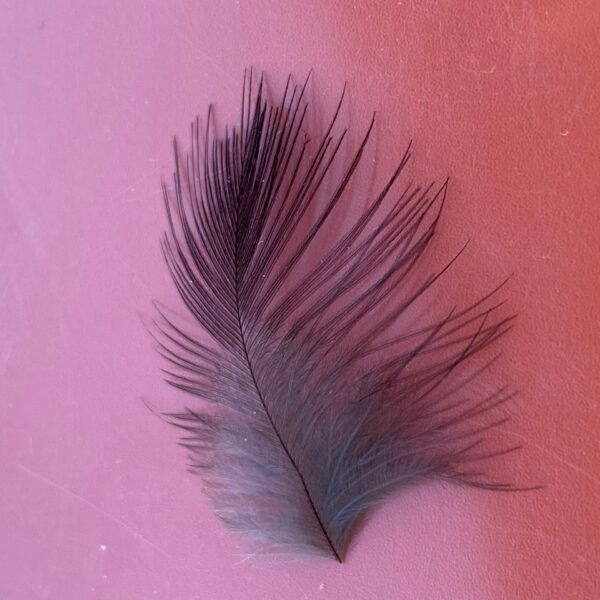 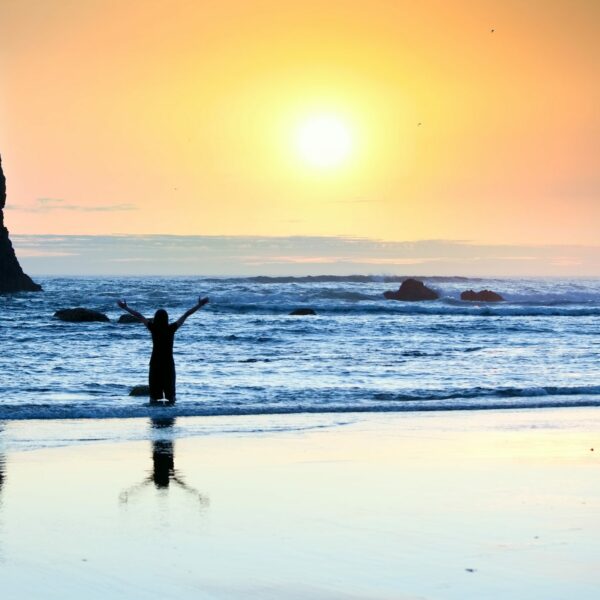 “Ma, I want to be a nun,” I said. “I’m going to enter a convent.” I sat across from my mom in the restaurant of the J.L Hudson department store in Ann Arbor, Michigan. 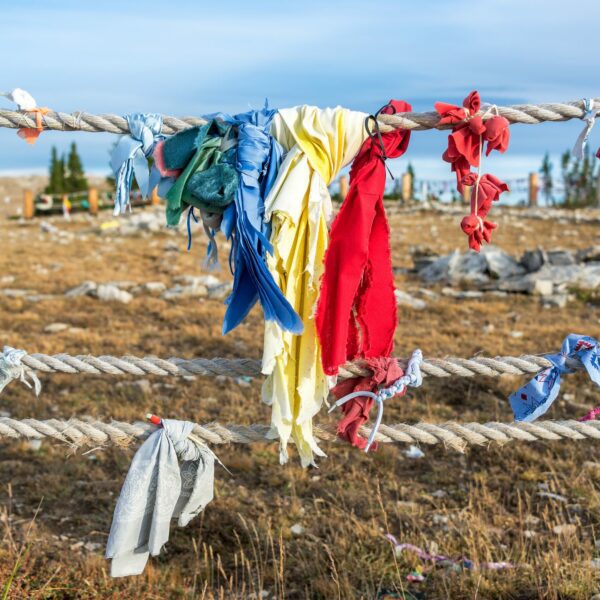 What started out as a rustic camping vacation ended as a spiritual thunderclap. I suspected that I was guided through life by an unseen force, and after this thunderclap I never again doubted.